Helping You Get Found Online! 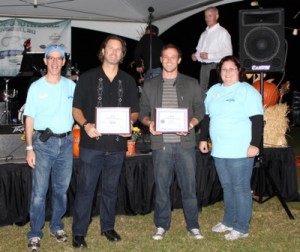 When the South Lake Chamber of Commerce in Central Florida ran a contest spanning several weeks to crown a Social Media Champion, the team at Exposure One gave everyone a big head start.

It wasn’t Exposure One’s choice to give the field a head start; it was the fact that Exposure One did not hear about the contest until 48 hours before it was ending. That wasn’t going to stop the team from jumping in and ultimately winning.

So what exactly did Exposure One pull off within a 48-hour period?

It was Exposure One’s opportunity to “walk the talk.”

Exposure One’s founders, Fred Rewey and Tracy Z, have a book coming out in 2013 that shows small business owners how to do exactly that – leverage social media for increased business.

Their book has been needed in the small business market for some time.

“Sure, there are plenty of books out there, but no one in our opinion really gives the business owner the information they need to decide which social media outlets they should focus on and which are a waste of time,” said Tracy.

Fred Rewey added, “The fact of the matter is that search engines are focusing on local results. It has never been more important for businesses to clean up [or start] their online presence. The upcoming book helps gives people the information they need.”

On November 1, 2012, South Lake Chamber presented Exposure One with the Social Media Champion Award, saying they had the “Best comprehensive social media promotion.”

Look for more from Exposure One in the near future as well as the January 2012 release of their book.

Connect With Us Online

Other Areas to Visit

We invite you to call our office or send an email using the contact us page.

“ExposureOne is the best website developer we have ever used!"

"The customer service is outstanding."

"Thank you for doing exactly as promised."